Read the story of Dakota Meyer at this link: http://www.militarytimes.com/news/2011/09/marine-dakota-meyer-prepares-to-receive-medal-of-honor-090611w/ .

We are blessed to have such young men serving America. He will receive the Medal of Honor from President Obama today. 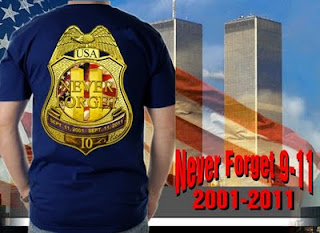 I’m an old retired guy now, but on September 11, 2001, I was a police detective in . When the attacks began, I was standing in the Clerk of the Court’s office in while I taught a new detective how to get an arrest warrant issued.

One of the county employees rushed out and said a plane had just hit the . By the time we got back to the police department, the second plane had also struck. The first war of the 21st century had begun.
Since the attacks of 9/11, I managed to squeeze in almost four years of Army Reserve active duty. Some of it was stateside, training and mobilizing troops who then served in or . I spent some of my active duty in where I led a Protective Service Detail in . Our mission was to protect a general in the Green Zone and during his travels throughout .
It’s still hard to think about September 11th and the tragedy that unfolded before our eyes. We were glued to the television, helpless as American souls threw themselves out of skyscraper windows, died under the crushing weight of steel and concrete, or fought to the death as warriors on Flight 93.
When I watched President Bush, President Clinton, and Vice President Biden speak at the dedication of the Flight 93 Memorial in Pennsylvania, it was a pleasure to see American leaders who seldom agree politically join together to honor the courage and sacrifice of the forty heroes on Flight 93.
Our parents always recall where they were when was attacked in 1941. We will always remember how our own lives changed forever on September 11, 2001, but we shall never waiver in our resolve to be strong in the face of those who wish to harm us.
We paid a heavy price on 9/11, but our soldiers, sailors, airmen, and Marines have taken the fight to the enemy. Thousands of terrorists have been killed or captured, and bullets fired by American warriors ensured that Osama Bin Laden, the architect of 9/11, finally paid for his mortal sins.
The message to the terrorists has never been clearer. If you attack our nation and kill or injure our citizens, there is no place on earth to hide. We will hunt you down no matter how long it takes. When we find you, surrender. If you do not, we will destroy you.
So help us God…
Charles M. Grist
www.MyLastWar.com
Posted by Charles M. Grist: at 7:45 PM No comments: