Life At 64 – The Adventure Continues

I turn 64 today. It was suggested to me that I create a “bucket list.” I politely told the person that I didn’t need a bucket list. I’ve done just about everything I could desire to do in life.

No, it hasn’t been perfect. Whether alone or with Debbie, my wonderful wife of almost forty years, I have spent the last six plus decades walking the challenging path we call life. We have known success, failure, and success again. We have endured challenges, painful loss, and bittersweet times, but through it all we have endured with a philosophy of never giving up on life or each other.

I don’t need a bucket list. I am indeed proud to say that I managed to graduate from college, become an Army paratrooper and Ranger, serve in two wars, survive the bullets, mortars, or rockets directed at me, climb tall mountains, cross raging rivers, walk through jungles in Asia filled with both men and animals that could kill me, traverse deserts in the Middle East also filled with both men and animals that could kill me, jump out of perfectly good airplanes, ride a surfboard at dawn, scuba-dive in the ocean with sharks and in freshwater springs with alligators, survive the crash landing of an airplane, own a business, put a lot of bad guys in jail as a cop (and help a few good guys along the way), start a scholarship fund to honor a fellow police officer’s memory, write a book, live in the best country on earth, have the greatest parents and sister anyone could ask for, marry the finest woman in the world, father four beautiful children, and live to see my wonderful grandchildren. I didn't do everything right, but I hope the pluses are more than the minuses.

I have no right to ask for more than God has given me so far. I only wish to spend as much quality time with Debbie as I can. We have been blessed to retire together.

I received the following email from a good friend. We both grew up in Orlando in the fifties and sixties, and we now find ourselves on the far side of the hill of life. We don’t plan to cash in our chips any time soon, but it is easier to see the end of the game somewhere down the road:

****
“Yes, I have regrets. There are things I wish I hadn't done...things I should have done, but indeed, there are many things I'm happy to have done. It's all in a lifetime.

If you're not in your winter yet, let me remind you that it will be here faster than you think. So, whatever you would like to accomplish in your life please do it quickly! Don't put things off too long! Life goes by quickly. Do what you can today, as you can never be sure whether this is your winter or not!

'Life' is a gift to you. The way you live your life is your gift to those who come after. Make it a fantastic one. Live it well, enjoy today, do something fun, be happy, travel everywhere, and have a great day. Remember that it is health that is real wealth and not pieces of gold and silver. Live happy in 2013!

Stay well, 'OLD FRIEND!' Send this on to other 'Old Friends!' and let them laugh in AGREEMENT!

It's not what you gather, but what you scatter that tells what kind of life you have lived.”

****
Thanks to my friend for his wisdom. Thanks to my family and friends for their support and love. Thanks to you for taking the time to read an old man’s musings.

Thanks to God for this life.... 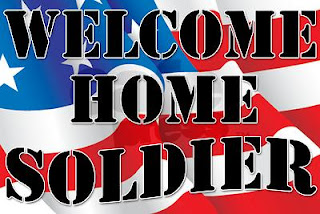 You can never get tired of these reunion videos. Get the tissues out:

THERE WILL BE TEARS: U.S. ARMY SGT. RETURNS HOME AFTER A YEAR IN AFGHANISTAN AND SURPRISES SONS AT SCHOOL ASSEMBLY

U.S. Army Sgt. Chris Page had been away from his two sons for roughly a year serving in Afghanistan. On Tuesday of last week, Hunter Dodd and Chandler Pittman got their dad back in a tearful reunion at a school assembly.

See the full story and the video here: http://www.theblaze.com/stories/2013/02/25/u-s-army-sgt-returns-home-after-a-year-in-afghanistan-and-surprises-sons-at-school-assembly/

You can also watch more of these great videos at the Welcome Home Blog.

Army Staff Sergeant To Receive The Medal Of Honor

The White House has announced that Staff Sergeant Clinton Romesha, 31, will be awarded the Medal of Honor for “acts of gallantry” during a battle for Combat Outpost Keating in Afghanistan on October 3, 2009.

A large enemy force of some three hundred fighters attacked the base with rocket-propelled grenades, machine guns, mortars and rifles. During the battle, which lasted a full day, Romesha inspired other soldiers with his courage, personal example and leadership.

He killed several enemy troops, was wounded, and still developed a plan to secure major parts of the base. Romesha exposed himself to enemy fire and continued to eliminate enemy positions. He also directed air support that resulted in the destruction of a large enemy force, and he led other soldiers forward to recover wounded and dead American troops. A total of eight Americans were killed.

According to journalist Jake Tapper in his book “The Outpost,” Romesha is “an intense guy, short and wiry.” Tapper said that Romesha was the son of a Mormon church leader.

In three weeks, I will turn 64. I retired from the Army Reserve in 2009 (with service in Iraq as well as Vietnam). In 2010, I retired after twenty years as a police officer.

Back in 1970, I arrived in Vietnam as a twenty-one-year-old Army Ranger lieutenant. I would serve as an infantry platoon leader in combat where I would experience the deaths of men I knew as well as participate in the killing of the enemy soldiers who wanted to kill us.

Every day was lived on "red alert" where you were ready for something terrible to happen. When there was no action, there was the threatening silence of the jungle around you that was filled with bad guys. Who wouldn't remember most of this, no matter how long ago it happened?

Before you read the article below on Post Traumatic Stress Disorder (PTSD), check out this LINK to an article about the general statistics of Vietnam veterans. You will probably be surprised, and you will also learn that the guy with the work for food sign at the overpass is probably NOT a Vietnam veteran.

I encourage my fellow Vietnam veterans, my fellow post-9/11 veterans, or the veterans of any war to seek help if you need it. You are my brothers and sisters and I care about you.

No veteran of any war can escape the curse of the memories, those ghosts that often come to you in the dark of night. Some can handle the memories just fine, but others cannot.

As a poster in the local Veteran's Administration clinic says, "It takes the strength of a warrior to ask for help."

The following article from Stars and Stripes talks about retiring Vietnam veterans like me and the possibility that PTSD might rise from the shadows even forty years after the war:

The most lethal sniper in American history, Chris Kyle, has been murdered in Texas while helping an ex-soldier suffering from Post Traumatic Stress Disorder (PTSD). Kyle and another man were shot and killed.

Chris was a former Navy SEAL and the bestselling author of the book “American Sniper: The Autobiography of the Most Lethal Sniper in U.S.Military History.” He was killed at the Rough Creek Lodge gun range in Texas on Saturday.

The suspect, Eddie Ray Routh, allegedly stole Kyle’s car and fled the scene. He was captured by police after a pursuit and after he rammed a police vehicle. He will be charged with murder.

Kyle served four tours of duty in Iraq. He also had 160 kills as a Navy SEAL, according to NBC DFW reports.  According to the Stephenville Empire-Tribune, his longest successful shot was to take out an insurgent with a rocket launcher 2,100 yards away.

Kyle was also known for his confrontation with Jesse Ventura when he said he punched Ventura in the face.

Chris Kyle was married and the father of two.

When interviewed by Guns.com, here is what Kyle had to say about Obama's proposed gun control measures and other issues:

Our thoughts and prayers go out to Chris’s family, friends, and fellow warriors.