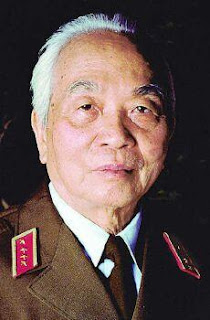 A friend from the great state of Kentucky sent me the following:

General Giap was a brilliant, highly respected leader of the North Vietnam military. The following quote is from his memoirs currently found in the Vietnam war memorial in Hanoi:

"What we still don't understand is why you Americans stopped the bombing of Hanoi. You had us on the ropes. If you had pressed us a little harder, just for another day or two, we were ready to surrender! It was the same at the battles of TET. You defeated us! We knew it, and we thought you knew it.

But we were elated to notice your media was definitely helping us. They were causing more disruption in America than we could in the battlefields. We were ready to surrender. You had won!"

General Giap has published his memoirs and confirmed what most Americans knew. The Vietnam war was not lost in Vietnam -- it was lost at home. The exact same slippery slope, sponsored by the US media, is currently well underway. It exposes the enormous power of a biased media to cut out the heart and will of the American public.

A truism worthy of note: Do not fear the enemy, for they can take only your life. Fear the media far more, for they will destroy your honor.

My thanks to my friend for sending me the above article.

For anyone who believed that the Vietnam war was lost militarily, now you know the truth from the enemy's point of view.