A Hero Takes His Own Life – PTSD And Living With Ghosts 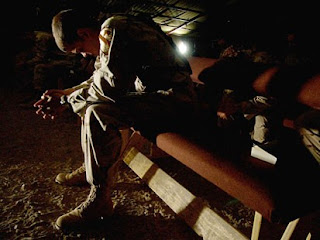 As someone who served in both Vietnam and Iraq, I have seen my share of the horrors of war. I may be sixty-four years old, but I still see the faces of my young soldiers in Vietnam like it was yesterday - the ones who lived and the ones who died.

There is an ache in my soul that is always there. But I have lived with it for so long that it has become a part of who I am. I call it “living with ghosts”; the body bags, the torn bodies, the blank faces, the jungle clearings, the crashed helicopters, the smells, the sounds….

When I was first married almost forty years ago, my wife said she would wake up in the middle of the night, and she could see my silhouette creeping through the room like I was holding a rifle on patrol. I would wander around for a while then return to bed. She said she was too scared to wake me up. My night "patrols" stopped eventually – to her great relief – but I never remembered them.

I was lucky, and I learned to cope with the bad memories even though a passing thought can bring goose bumps to my arms. Like many veterans from America's wars, I can't forget the horrors. But all men and women are made differently. Some can learn to live with the ghosts, but others cannot.

Remember my fellow warriors: It takes a warrior to ask for help. Your brothers are here for you. Seek help, contact the VA, talk to a college counselor, do something, do anything, but do not give up. You would not quit on the battlefield, so do not quit back here.

The following story is about a young captain who did his very best to help soldiers who were both psychologically and physically wounded by war. He counseled them on the battlefield, and he tried to help them heal at home. Unfortunately, his own soul’s pain was magnified by the suffering of others, and he eventually committed suicide. Like the inmate in the “Green Mile,” he took the pain of his fellow troops as if it were his own while trying to teach them how to live with what they had endured.

He had a knack for soothing soldiers who'd just seen their buddies killed by bombs. He knew how to comfort medics sickened by the smell of blood and troops haunted by the screams of horribly burned Iraqi children.

Capt. Peter Linnerooth was an Army psychologist. He counseled soldiers during some of the fiercest fighting in Iraq. Hundreds upon hundreds sought his help. For nightmares and insomnia. For shock and grief. And for reaching that point where they just wanted to end it all.

****
Rest brother, until your fellow warriors are with you once again….