The Message In The Rainbow 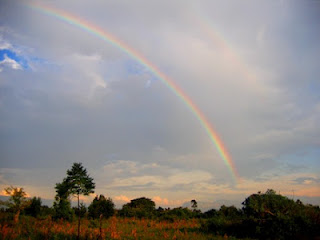 After I arrived in in 1970, there was an interesting observation in the first letter I received from my mother Claire. “As your plane took off,” she wrote, “I knew you would be all right because there was a rainbow over your right shoulder.”

When Mom died in 1974, one of the many ways I tried to deal with my grief was to visit a psychic in . The old woman said she had a message from my mother. “She’s happy,” said the medium, “because she sees a rainbow over you, and she knows you will be all right.” I remembered the message in that letter and felt an icy chill slide down my back.

Yesterday morning, my mother’s sister and my beloved aunt Corinne Joiner passed away at the age of 90. As I told my sister and other relatives at the hospital, I was sure that the loved ones who had passed on, including my mother, my father John, Corinne’s husband Jasper, and her mother – and my grandmother - Leonna Lindell had all stood in spirit with my aunt as she made her transition to the next life.

While we were driving home from my cousin Jim’s house last night, my wife Debbie and I discussed our memories of Aunt Corinne. We were naturally sad at her passing, but we felt sure that she was now safe with God and those relatives who had preceded her.

It’s now one o’clock of the following morning. I just woke up out of a sound sleep and realized the significance of that rainbow.

It was my mother’s way of telling us that Aunt Corinne is with them now. She is at peace, and those of us she left behind will be all right.