The following movie trailer is awesome. Real Navy SEALs were used in the filming of this action movie.

Enjoy the trailer and pass it on; this is a movie for real Americans who want to see real good guys in action - without the typical Hollywood gratuitous bull:

Victory In Iraq - Now It's Up To The Iraqis

I'm a Vietnam veteran as well as a veteran of Operation Iraqi Freedom, so I know a little about guerrilla wars. Sometimes they end well, and sometimes they don't.

You see, I remember what it felt like to sit in my living room in April, 1975, staring at the television while enemy tanks rolled into Saigon. Only then did I have the painful realization that my fellow soldiers and I had fought and bled for a lost cause.

I'm not ashamed to say I cried that day. I remembered the hardships of my own months in Vietnam's jungles, and I saw the faces of my lost friends in the dark corners of my mind. To be honest, I still see them almost every day. You know - those couple of hours in the middle of the night when sleep won't come and the mind refuses to rest. Such is the legacy of Vietnam.

Although the losses are just as painful, the story in Iraq is a different one. When our last soldiers arrive home before Christmas and Iraq's security rests in its own hands, we can honestly say we have been victorious.

There are now over thirty million people living in Iraq. Because of the sacrifice of America and its coalition partners, there is a democratic government elected by the people. Is everything perfect? Of course not. But the problems that remain can only be solved by Iraqis. Whether it is sectarian differences or problems caused by foreign terrorists, it is time for Iraq to take care of itself.

What do I fear most now that we have pulled our soldiers out of Iraq? I fear the influence of Iran, a Shiite country that provides training and equipment to radical Shiites in Iraq like Muqtada al Sadr and the Mahdi Army.

But Americans cannot stay in Iraq forever. The truth is that wherever we go, we become a lightning rod for those with ancient reasons for hating foreign intervention. It was this way in Vietnam, in Iraq, and it is also the same in Afghanistan.

We must welcome our troops home from Iraq as the victorious warriors they are. We shall help them recover both physically and mentally, and they should be proud of all they accomplished.

We shall also continue to extend the hand of friendship to the Iraqi people. While many fundamentalist Iraqis will always hate us, there are a lot of Iraqis who will never forget the generosity of America or our sacrifices on their behalf. We have done all we can to give them a chance for a free and prosperous future. 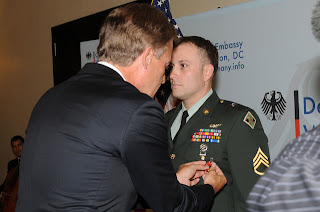 Extraordinary ceremony honoring one of America's warriors. The YouTube video comments posted by the German Embassy are as follows:

"The deep bonds of the German American friendship, and the deep bonds between soldiers, were on display on December 8, 2011, as German Ambassador Peter Ammon presented one of Germany's most significant military honors to a US soldier who was instrumental in the rescue during battle of a Bundeswehr soldier in Afghanistan. U.S. Staff Sergeant Peter Woken was awarded the Medal of Honor for Gallantry in Action of the Federal Republic of Germany, bestowed on him by German Defense Minister Thomas de Maizière, in recognition of his role as part of the MedEvac crew that landed in heavy fire to evacuate German Corporal Tim Focken in Afghanistan on October 17, 2010." 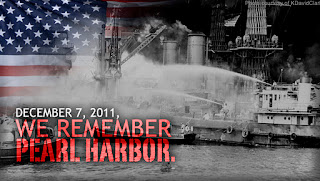 For the members of my generation, the day of infamy is September 11, 2001, when terrorists attacked America, killing some 3,000 of our citizens.

For the members of my parents' generation, that day of infamy will remain December 7, 1941, when the Japanese attacked America's naval fleet in Hawaii, also killing thousands.

The members of the Greatest Generation are fast fading from the scene, but I hope each of you will take the time today to pray for the victims of the 1941 attack and their families. For some of these veterans, the memories are as real today as they were then.

Those of us who are veterans of other wars can understand that...