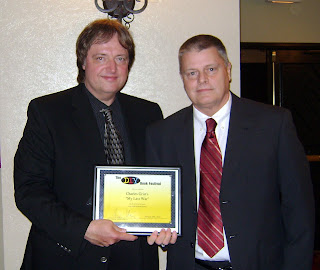 My wife Debbie and I had a great time in Hollywood for the DIY Convention. During this event, my book "My Last War", was awarded the grand prize for the 2009 DIY Book Festival. The prize came with a cash award of $1,500!

The evening included numerous awards for books and films, and I had a chance to meet a lot of very creative people. The picture (above left) shows Bruce Haring, general manager of the DIY Convention, presenting me with the award.

During my acceptance, I said that I was honored to serve with my fellow soldiers in Vietnam, and I was equally honored to serve with their sons and daughters in Iraq. I asked everyone present to pray for the soldiers, sailors, airmen, and Marines whose service around the world was making it possible for us to enjoy our evening in peace and safety. I also asked for prayers for the families of our warriors and for those who have made the ultimate sacrifice. 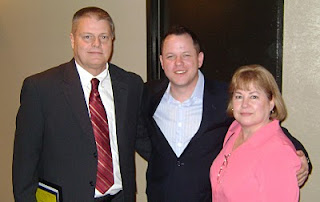 I was fortunate also to have the chance to link up with Doc (left with Debbie and me), my medic in Iraq. Doc (John Actis II AKA actor John Ceallach) lives in Hollywood, and he was able to attend the ceremony.

Thanks again to those who have bought the book, who have supported me in my efforts, and who have contacted me via email, Facebook, or "snail" mail.

Marines Taking the Fight to the Taliban 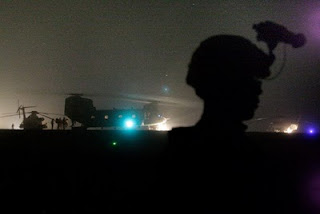 The Marines continue to do a magnificent job in the war in Afghanistan. The following article from Military.com and the Associated Press tells the story of a difficult mission:

MARJAH, Afghanistan --- Elite Marine recon teams were dropped behind Taliban lines by helicopter Friday as the U.S.-led force stepped up operations to break resistance in the besieged insurgent stronghold of Marjah.

About two dozen Marines were inserted before dawn into an area where skilled Taliban marksmen are known to operate, an officer said, speaking on condition of anonymity because of security concerns.

Other squads of Marines and Afghan forces began marching south in a bid to link up with Marine outposts there, meticulously searching compounds on the way. The 7-day-old Marjah offensive is the biggest since the 2001 U.S.-led invasion of Afghanistan and a test of President Obama's strategy for reversing the rise of the Taliban while protecting civilians.

Several residents interviewed said some Taliban fighters in the area were non-Afghan.

"Some of them are from here. Some are from Pakistan. Some are from other countries, but they don't let us come close to them so I don't know where they are from," said poppy farmer Mohammad Jan, 35, a father of four.

A NATO statement said troops are still meeting "some resistance" by insurgents who engage them in firefights, but homemade bombs remain the key threat to allied and Afghan forces.

Six coalition troops were killed Thursday, NATO said, making it the deadliest day since the offensive began. The death toll so far is 11 NATO troops and one Afghan soldier. Britain's Defense Ministry said two British soldiers were among those killed Thursday.

No precise figures on Taliban deaths have been released, but senior Marine officers say intelligence reports suggest more than 120 have died. The officers spoke on condition of anonymity because they were not authorized to release the information.

U.S. and Afghan troops encountered skilled sharpshooters and better-fortified Taliban positions Thursday, indicating that insurgent resistance in their logistics and opium-smuggling center was far from crushed.

A Marine general said Thursday that U.S. and Afghan allied forces control the main roads and markets in town, but fighting has raged elsewhere in the southern farming town. A British general said he expected it would take another month to secure area.

Brig. Gen. Larry Nicholson, commander of U.S. Marines in Marjah, told The Associated Press that allied forces have taken control of the main roads, bridges and government centers in the town of 80,000 people about 360 miles (610 kilometers) southwest of Kabul.

"I'd say we control the spine" of the town, Nicholson said as he inspected the Marines' front line in the north of the dusty, mud-brick town. "We're where we want to be."

Throughout Thursday, U.S. Marines pummeled insurgents with mortars, sniper fire and missiles as gunbattles intensified. Taliban fighters fired back with rocket-propelled grenades and rifles, some of the fire far more accurate than Marines have faced in other Afghan battles.

The increasingly accurate sniper fire --- and strong intelligence on possible suicide bomb threats --- indicated that insurgents from outside Marjah are still operating within the town, Nicholson said.

Under NATO's "clear, hold, build" strategy, the allies plan to secure the area and then rush in a civilian Afghan administration, restore public services and pour in aid to try to win the loyalty of the population in preventing the Taliban from returning.

But stubborn Taliban resistance, coupled with restrictive rules on allies' use of heavy weaponry when civilians may be at risk, have slowed the advance through the town.

British Maj. Gen. Nick Carter, NATO commander in southern Afghanistan, told reporters in Washington via a video hookup that he expects it could take another 30 days to secure Marjah.

NATO has given no figures on civilian deaths since a count of 15 earlier in the offensive. Afghan rights groups have reported 19 dead. Since those figures were given, much of the fighting has shifted away from the heavily built-up area where most civilians live.

Afghan President Hamid Karzai has repeatedly criticized the use of airstrikes and other long-range weaponry because of the risk to civilians. Twelve of the 15 deaths reported by NATO happened when two rockets hit a home on Sunday.

Also Thursday, a NATO airstrike in northern Afghanistan missed a group of insurgents and killed seven Afghan policemen, the Interior Ministry said. A NATO statement acknowledged the report and said it and the ministry were investigating.

In eastern Afghanistan, eight Afghan policemen defected to the Taliban, according to Mirza Khan, the deputy provincial police chief.

The policemen abandoned their posts in central Wardak province's Chak district and joined the militants there, he said. One of them had previous ties to the Taliban, he said, but would not elaborate.

"These policemen came on their own and told us they want to join with the Taliban. Now they are with us," Taliban spokesman Zabiullah Muhajid said.

My brother-in-law, Ron Spitzer, is a Marine who served during the Vietnam era. He has always exemplified a Marine to me. I know the success of the young Marines of today makes him proud, as it does all of us.

I am proud to announce that my book, "My Last War: A Vietnam Veteran's Tour in Iraq," has won the 2009 DIY Book Festival.

LOS ANGELES (February 4, 2010) The story of an Army veteran who served in Vietnam and Iraq is the winner of the 2009 DIY Book Festival, which honors independent and self-published books.

“My Last War: A Vietnam Veteran’s Tour In Iraq," (published by iUniverse), is the story of Charles M. Grist, one of the few Vietnam veterans to have served as an enlisted soldier in the Iraq war. His daily journal captures his team’s wartime experiences, taking the reader into a life filled with mortar and rocket attacks and the constant threat of ambush.

But Grist’s clear-eyed sense of duty and his compassion for all in the chaos of war is the real focus of the book, which serves as a great reminder of the human side of combat, no matter where a reader stands on the issues.

Grist and other competition authors and publishers will be honored at a dinner in Los Angeles on February 25 as part of the tenth annual DIY Convention: Do It Yourself in Film, Music & Books.

Thanks to everyone who has supported my writing efforts - especially those who have bought the book!