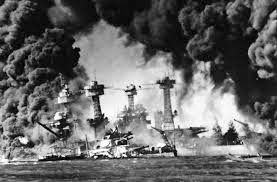 Although it has been 73 years since the Japanese attack on Pearl Harbor, Hawaii, the memories endure for those few remaining veterans who survived this attack.

The following article tells the story of one of those men:

Joe Quercia was talking to a buddy and staring out a porthole of the USS Medusa in Pearl Harbor when gunfire rang out and an explosion rocked the Hawaiian naval base on Dec. 7, 1941.

"I watched all these planes coming over and (heard) the Arizona get blown up," Quercia, 92, of Fresno, said of the attack on the battleship as it was berthed in Oahu. "When it exploded, you could sure feel that."

The attack by Japanese pilots continued for about an hour and a half, turning what was supposed to be the start of a day off at the beach into the beginning of the United States' involvement in World War II.

"We lost about 2,500 service men and how many million tons of iron was sunk?" said Quercia, whose recollection of that day remains sharp. "Eight battleships were hurt. We had 20-something ships that got injured."

Quercia, who served as a naval chief petty officer, is one of the central San Joaquin Valley's few remaining Pearl Harbor survivors. The Valley once had 150 veterans who were stationed at the base when the Japanese attacked, but those numbers have dwindled, leaving only a few to continue sharing their experiences.

On Sunday, Quercia will join a handful of other survivors at the annual Pearl Harbor Remembrance Day ceremony. This year it will be at the Clovis Veterans Memorial District.

The event was moved from Fresno, where it was held last year at the Legion of Valor Museum in the Veterans Memorial Auditorium. Before that, the ceremony was conducted at the Fresno veterans hospital for years.

Quercia believes there could be as many as 10 remaining local survivors, but only four have attended the ceremony in the last couple years, he said. "We're all in our 90s now," he said.

The northeast Fresno resident grew up in west Fresno and enlisted in the Navy when he was 18. Quercia was stationed on a repair ship, with no guns, about a block away from the USS Arizona when it was hit. He served in the Navy for six years.

"I gave them six years and that was enough for me," Quercia said. "The water is so big and you get tired staying on the ocean."

Tim Springer, who is organizing Sunday's event with the help of the Veterans of Foreign Affairs Post 3225 and other veterans service organizations, continues to hold the ceremony to honor the living veterans and those who have passed.

The motto of the Pearl Harbor Survivors Association, whose local branch disbanded in 2011, is to "remember Pearl Harbor, keep America alert," Springer said.

"We want to honor these guys, them and their friends who made the ultimate sacrifice on Dec. 7, 1941 so they are not forgotten."

*  *  *  *
The lessons from Pearl Harbor include the need for a strong military, how important intelligence-gathering is, and the requirement that we never assume that the worst possible scenario won't happen tomorrow.

“Out of every one hundred men, ten shouldn't even be there, eighty are just targets, nine are the real fighters, and we are lucky to have them, for they make the battle. Ah, but the one, one is a warrior, and he will bring the others back.”― Heraclitus

At four a.m. this morning, I woke up to the sound of some drunk driver hitting my mailbox with his side mirror. After I went outside to check the damage, I realized that I would never be able to fall asleep again, so I checked my email.

Awaiting me was the news that my long-time friend, Sergeant First Class Dan McKinney, had passed away. He was not just my friend; he was the friend to countless numbers of his fellow Americans, especially to those who – like him – had been wounded in action. Dan and I had both served in Vietnam at different times, just as we would both serve in Operation Iraqi Freedom in different years. We were also both law enforcement officers. He worked for the feds; I was a city cop.

I wrote about Dan years ago after he was wounded in Iraq, and I related the story of his heroic actions. That article appeared in the Orlando Sentinel here:  http://articles.orlandosentinel.com/2005-09-24/news/GRIST24_1_dan-mckinney-iraq-wounded and also here in my blog where I referenced the Sentinel article: http://americanranger.blogspot.com/2006/12/bravery-under-fire.html .

One incident I did not discuss was a training mission in the Army Reserve where Dan and I showed the youngsters how a couple of Vietnam vets could kick their asses.

The mission required a company sized infantry defense, with booby traps, listening posts, and about a hundred soldiers. Their mission was to defend against the ominous threat of the two of us. That’s right. We were the “Viet Cong” sappers, and before the night was over we had successfully “blown up” much of the interior of their perimeter (including trucks and generators) and “assassinated” their commander.

Of course, no one was really hurt by the two old guys dressed in black, but we enjoyed teaching them a lesson they would never forget.

Dan lived a life full of meaning and sacrifice. As a wounded warrior himself, he became an inspiration to countless other wounded warriors by helping them and their families recover from terrible life-changing injuries. He not only displayed courage in Iraq when he was severely wounded by a suicide bomber, but his recovery from those devastating wounds was also an example of immense courage.

Godspeed, Dan. Hold a place on the perimeter for me….