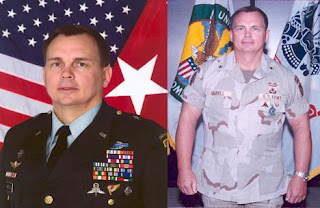 The following article was sent to me via friends at Fort Benning. It was published on WRAL.com in North Carolina. It tells the story of one helluva warrior, Major General Gary Harrell:

Gary L. Harrell was headed for a high school algebra class when an announcement offered an attractive alternative: A pitch on Army ROTC.

Harrell was not sure how he would pay for college and had some interest in the military. He filled out the ROTC paperwork.

On March 6 at Fort Bragg, the former Delta Force commander retired as a major general from the Army at age 57, ending a career of almost 35 years that took him to every post-Viet nam hot spot, from Grenada to Iraq and Afghanistan.

"I was planning on getting out as a captain," he said. "I've had the privilege of working with and commanding some of the finest soldiers we have in the military."

At his retirement ceremony, Lt. Gen. Robert Wagner, commander of the U.S. Army Special Operations Command at Fort Bragg, said the 40 or so generals or their wives who gathered to say farewell to Harrell might have been a record.

"I would also mention that we have some of Gary's closest personal friends here today: gun dealers, knife makers, ammunition purveyors, and, apparently, some people released from prison just to be here," Wagner said in a nod to Harrell's long career in some of the Army's toughest and most secretive units.

Harrell helped rescue U.S. hostage Kurt Muse from a Panamanian jail in 1989 and hunt down Colombian drug lord Pablo Escobar. He searched for mobile Iraqi Scud missile launch ers in the first Persian Gulf war in 1991, was a commander during the 1993 battle of Mogadishu immortalized in the book and movie "Black Hawk Down" and led perhaps the largest special operations force into combat in U.S. history in Iraq.

"If it was complex, if it was difficult or critical to our nation, Gary was there," Wagner said. For the past year, Harrell has been Wagner's deputy.

"I relied on Gary's unmatched expertise, broad credibility, judgment and common sense advice on every decision we made," Wagner said.

Harrell, who played defensive tackle at East Tennessee State University, is a block at 6-foot-1, 240 pounds. People who know him roared with laughter when they saw a slightly built actor portray him in "Black Hawk Down."

"At least twice, Gary nearly lost his life serving our nation, in a helicopter crash in Panama that broke his back and in Somali a when a mortar round detonated within feet of where he stood, severely injuring and nearly severing his leg and inflicting other life-threatening injuries," Wagner said. "Except for his brute strength of mind and body and the heroic medics, Gary would not have survived to be here with us today."

To be sure, Harrell is a study in contrasts. He spent his career dodging the spotlight in the military's most secretive units, yet he was portrayed by name in two books and a popular movie.

Acclaimed as a combat leader, he displayed his soft side at the ceremony, holding hands with his wife and high school sweetheart, Jennifer. Over the years, she accompanied him to tell families that their loved ones would not be coming home. He spoke glowingly of his children and grandchildren.

"I'm more proud of being their father and grandfather than I am of retiring as a two-star general," he said.

Although Harrell is one of the military's premier experts in rapid, violent strikes, he is quick to point out that victory against terrorism may lie in education and patiently helping other countries solve their own problems.

He sees nuances in the most notorious characters, such as Escobar, the murderous Colombian drug lord.

"If you talk to the folks on the street of Medellin, this guy took care of their rent when they couldn't make it," Harrell said in an interview a couple of days before his retirement. "As near as I understand it, he took a lot of his money and put it back into the community in terms of taking care of poor people, kind of a Robin Hood-type twist to it."

Understanding the adversary is important in today's war, he said.

"There is certainly a lot of evil there, but there's another facet you need to understand. And that's important today, because Hamas has a side of it that does a lot of that same-type deal for Palestinians who a re in need," he said. "On the other hand, Hamas has got a large cadre of murderers and brigands and those type things. ... If you omit either one of those in your analysis, you are apt to make a big mistake."

Harrell was commissioned as a second lieutenant in 1973. Ten years later, he got his first taste of war with the 82nd Airborne Division during the 1983 Grenada invasion.

"I remember walking out of the headquarters one morning and seeing an A-7 (attack airplane)," he said. "I could tell he was on a bomb run. I remember thinking, 'Gee, I thought the 82nd was over there.' He dropped a bomb on brigade headquarters. Those things happen in war. You make mistakes like that sometimes."

The military learned the painful lessons of Grenada, he said, such as the need to improve battlefield communications among the armed services.

Harrell was in the 10th Special Forces Group at Fort Devens, Massachusetts, when he got a call from Col. Bill Garrison, his former battalion commander, who said selection for Delta Force was coming up.

"He could be a man of few words when he needed to be," Harrell said. "'Hey! Harrell! Selection starts in the fall. Be there!'"

Delta's selection process is famous for rigorous marches and ordeals that make even Ranger and Special Forces selection pale by comparison.

"It's more a test of your mental ability in a lot of regards than it is your physical," Harrell said.

He passed the test and became a troop commander in Delta.

During the 1989 Panama invasion, Harrell was part of the team that swooped into the prison to rescue Muse, an American imprisoned for suspected CIA ties. Success, he said, lay in repeated rehearsals in Florida and Panama.

But they could not prepare fully for the barrage they had to face.

"I remember getting ready to go, getting back on one of the helicopters for the extraction and three basketball-sized, glowing red spheres went between me and the helicopter," he said. "I remember thinking, 'Hmmm, that wasn't good.'"

In 1993, he deployed to Somalia to help counter warlords that were undermining humanitarian efforts in the East African country. Two Black Hawk helicopters were shot down during a Delta Force and Ranger raid meant to capture warlord leaders.

Twice, Harrell turned down the request of two Delta Force operators to go to the rescue of one downed helicopter crew being overrun by a violent mob in Mogadishu.

Almost 15 years later, Harrell pauses with emotion when asked about his decision.

"They knew there was nothing else to back them up," Harrell said. "It was just them. They felt like it was so important to go that they needed to go."

Gordon and Shughart died in the rescue attempt, but they saved the helicopter pilot. They each received the Medal of Honor, the nation's highest military award.

"That's one of those that makes you ask, 'Where do we find men like that?'" Harrell said. "It wasn't like they just decided they'd hop off the helicopter and thought that somebody would come to their rescue. We had two helicopters down. We had the capacity to get one. We didn't have the capacity to get two. They knew what was going on."

"It's interesting because you've got several hundred experts who pride themselves on knowing everything about everything," he said. "You are the guy that has kind of got to keep them moving in the same direction. That was enjoyable. It could be frustrating."

Sometimes, the battles were with the bureaucracy.

In Afghanistan in 2001, Harrell asked for saddles for Special Forces soldiers operating in the mountains. The Pentagon assumed the soldiers were riding for fun.

He called back, "The phone call went something like this: 'Hey, I'll tell you what. I'll make a deal. I"l put you on a bony old horse, and let you ride around the mountains with a rucksack on, see how well you like that without a saddle.'"

As Harrell closed the book on his military career, Wagner, the USASOC commander, may have summed up the sense that the best chapters remain unpublished.

"Well, there's a lot more that could be said, but many stories remain untold," Wagner said. "Just be glad Gary was there."

We still need leaders like this. Good luck to the general in his well-earned retirement.