Support the Hubbard Act - Contact Your Senators and Congressmen 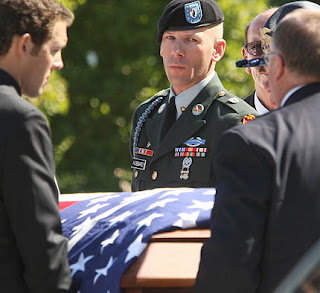 Today the Associated Press reported the tragic story of a soldier who lost both of his brothers in Iraq and then discovered that his sole-surviving son status had cost him and his family their own military benefits:

FRESNO, Calif. (April 17) - Forced to leave the combat zone after his two brothers died in the Iraq war, Army Spc. Jason Hubbard faced another battle once he returned home: The military cut off his family's health care, stopped his G.I. educational subsidies and wanted him to repay his sign-up bonus.

It wasn't until Hubbard petitioned his local congressman that he was able to restore some of his benefits.

Now that congressman, Rep. Devin Nunes, plans to join three other lawmakers in introducing a bill that would ensure basic benefits to all soldiers who are discharged under an Army policy governing sole surviving siblings and children of soldiers killed in combat. The rule is a holdover from World War II meant to protect the rights of service people who have lost a family member to war.

"I felt as if in some ways I was being punished for leaving even though it was under these difficult circumstances," Hubbard told The Associated Press. "The situation that happened to me is not a one-time thing. It's going to happen to other people, and to have a law in place is going to ease their tragedy in some way."

Hubbard, 33, and his youngest brother, Nathan, enlisted while they were still grieving for their brother, Marine Lance Cpl. Jared Hubbard, who was 22 when he was killed in a 2004 bomb explosion in Ramadi.

At their request, the pair were assigned to the same unit, the 3rd Brigade of the 25th Infantry Division in Hawaii, and deployed to Iraq the next year.

In August, 21-year-old Cpl. Nathan died when his Black Hawk helicopter crashed near Kirkuk. Jason was part of the team assigned to remove his comrades' bodies from the wreckage.

Hubbard accompanied his little brother's body on a military aircraft to Kuwait, then on to California. He kept steady during Nathan's burial at Clovis Cemetery, standing in dress uniform between his younger brothers' graves as hundreds sobbed in the heat.

But Hubbard broke his silence when he found his wife, pregnant with their second child, had been cut off from the transitional health care the family needed to ease back to civilian life after he was discharged in October.

"This is a man who asked for nothing and gave a lot," said Nunes, R-Calif., who represents Hubbard's hometown of Clovis, a city of 90,000 next to Fresno. "Jason is one person who obviously has suffered tremendously and has given the ultimate sacrifice. One person is too many to have this happen to."

Hubbard went to Nunes, who began advocating for the former soldier in December, after hearing the Army was demanding that he repay $6,000 from his enlistment bonus and was denying him up to $40,000 in educational benefits under the GI bill.

After speaking with Army Secretary Pete Geren, Nunes got the repayment waived, and a military health policy restored for Hubbard's wife.

But the policy mandated that she be treated at a nearby base, and doctors at the Lemoore Naval Air Station warned that the 45-mile trip could put her and the fetus in danger. Hubbard said doctors offered alternative treatment at a hospital five hours away.

Meantime, Hubbard and his two-year-old son went without any coverage for a few months.

The Hubbard Act, scheduled to be introduced Wednesday, would for the first time detail the rights of sole survivors, and extend to them a number of benefits already offered to other soldiers honorably discharged from military service.

The bill - co-sponsored by Rep. Jim Costa, D-Calif., Sen. Dianne Feinstein, D-Calif., and Sen. Saxby Chambliss, R-Ga. - would waive payback of their enlistment bonuses, allow them to participate in G.I. educational programs, give them separation pay and access to transitional health care.

Meanwhile, Hubbard, his wife Linnea and his son Elijah, have permanent health coverage now that he is once again working as a Fresno County sheriff's deputy, the job he left in 2004 to serve in Iraq.

The Army will adopt to any changes in policy springing from the legislation, said Army spokesman Maj. Nathan Banks.

"Foremost the Army itself sympathizes with him for the loss of his brothers," Banks said. "We will do everything within our means to rectify this issue. He is still one of ours."

Hubbard's father, Jeff, said that resolving the family's bureaucratic difficulties would provide some comfort, but would not help lessen their pain.

"We're still very much deeply involved in a grieving process. We're pretty whacked," he said. "This doesn't relate back to the loss of our boys, it can't, but we would consider it a positive accomplishment."

This terrible situation must never happen again. Please contact your Congressional representatives and encourage them to pass the Hubbard Act. Also, please forward this story to others who can assist in obtaining support for this bill.