Panetta Approves Women In Combat But They Are Already There 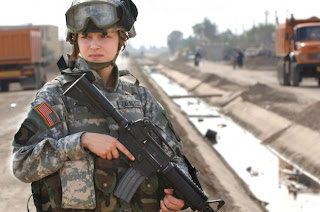 As an old Army infantryman, I never supported the idea of sharing a foxhole with a woman. War is supposed to be men’s work. As Steve Martin once joked about outdoor activities, “Manly men doing manly things in a manly way with other manly men.”

When I became a police officer a couple of decades ago, I also had similar feelings about women as cops. Then came a zone partner I’ll refer to as “Bev.”

The call was a fight in progress. I arrived first to see two black men facing off with martial arts weapons. One was armed with a bow i.e. a long stick; the other had a pair of martial arts weapons called sai i.e. foot and a half long steel sword-like weapons.  There was also a large crowd of about twenty people watching the confrontation.

When I arrived, I was the only cop there. I drew my handgun and ordered the two men to drop their weapons. The man with the bow immediately dropped it and backed away with his hands in the air. The other man, who was wearing only a pair of shorts, looked at me with an enraged glare, turned toward me, and took up a fighting stance, holding the sai in each hand in front of him. He was sweating, his neck muscles were pulsating, and every other muscle in his body was taught.

I looked into his eyes and told him to drop the weapons. I also said that if he took one step toward me, I was going to shoot him. He didn’t move and only continued to stare into my eyes.

Just then, the man’s mother ran into the scene, wrapped her arms around her son and said, “Don’t shoot my baby!” At that moment, he lowered both of his arms. I suddenly caught a flash of blue out of my left eye. “Bev” came out of the shadows toward the man’s right side, knocking the weapons out of his hands.

I quickly holstered my handgun and joined the fray. During the struggle, the mother struck Bev in the face and the single fight became two fights. After a couple of minutes, I managed to handcuff the man, and Bev handcuffed the woman. The incident was over with no serious injuries to anyone, largely because of Bev’s quick and fearless maneuver.

Bev’s actions that day, along with another female officer who later helped me subdue a six foot seven inch, three hundred pound domestic violence suspect, convinced me that a woman could handle anything in the police world.

I still had reservations about women in combat until my service in the Iraq war and the story of Leigh Ann Hester of the 617th Military Police Company.

On March 20, 2005, Hester was awarded the Silver Star, the nation’s third highest award for valor, following her actions during an enemy ambush on a supply convoy near Salman Pak, Iraq.

Hester’s MP squad was escorting a convoy when about fifty insurgents initiated an ambush with AK 47s, machine guns, and rocket-propelled grenades.

Hester led her fire team into a flanking position. From there, she and her squad leader, Staff Sergeant Timothy Nein, assaulted the enemy trench line with hand grenades, an M203 grenade launcher and M4 carbines. Hester herself killed at least three enemy troops. At the end of the battle, twenty-seven insurgents were killed, six were wounded and one was captured.

The moral of both these stories is that women are capable of fighting in war as well as on the streets of America. Just look at the women who serve courageously in the Israeli Army, as well as the American women who fly Apache helicopters and F16’s into combat.

Although times have changed, I still believe that women in the infantry will prove to be problematic. In harsh environments like the jungle or the desert, hygiene, privacy, potential male-female relationships, and natural physical limitations will likely be significant issues. And I’m sorry, but I’ll be terribly sad if they allow women in the Rangers, Special Forces, SEALs, or other special operations forces.

Leon Panetta has opened the door for women to join all military units that are subject to service in combat, and we should acknowledge that women are hardy souls who can possess just as much courage and determination as men – sometimes more.

But women in the infantry? Let’s just say this old soldier is glad he’s retired….