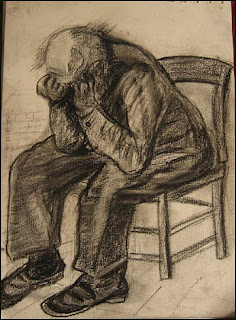 The old woman died while her husband spent the night in the hospital. She was 83; he was 87. They had been married for over sixty years.

Shortly after the paramedics pronounced her dead, the old man arrived home. Along with another officer, I met him at his car and informed him of his wife's passing. He was stoic but obviously shaken.

I stood by with a social worker while the funeral home prepared to remove the old woman's body. Then the old man asked if he could see his wife one more time.

We walked him up the stairs to his apartment. Just climbing those stairs was tough for the old man because time has taken its toll. Walking is difficult, even with a cane. With halting steps, he entered the bedroom where his wife had been found; we waited by the door.

The old man walked up to the woman with whom he had shared over sixty years. He touched her face, her neck, and her hand. We had learned that there were no other family members and, at their age, the elderly couple had outlived all of their friends. The old man was now completely alone.

After a couple of minutes, he slowly turned and started to walk out of the bedroom. Then he stopped and turned to look at his wife again. With halting steps aided only by the cane, he walked up to her for the last time. He touched her face, looking at her as if he were waiting for her to open her eyes and smile. To tell you the truth, I was starting to have a tough time myself because the emotion of the moment was affecting all of us. Yeah, cops have feelings too.

The old man came out of the room and sat in a living room chair. Looking up at the social worker, he said, "What do I do now?" I looked around the small apartment and, even though I had never met the couple, the place now had an eerie emptiness about it. There was an unfinished sandwich on the kitchen counter. Next to the television was a stack of old movies from the 1940s. I looked at the small loveseat and pictured them sitting together, holding hands, and sharing memories while they watched some old Fred Astaire movie.

There was a time when they were young, when they danced to the music from some big band, when they looked into each other's eyes and shared their hopes and dreams. They had lived that future, but one of them was destined to be the first to die. The old man must now walk alone into a hazy, solitary future.

The rest of us will gather with our families on Thanksgiving. We will laugh, share food and memories, and savor the joy that fills our homes on holidays. The old man will sit alone, grieving for his lost love, and pondering the uncertain days ahead.

When we say our prayers before our Thanksgiving feast, give thanks, but also remember those whose own holiday will be a lonely one.