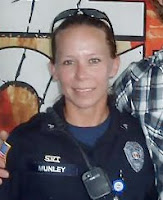 She'll surely say that she was just a cop doing her duty, but Fort Hood police officer Kimberly Munley's training paid off. Wounded in her encounter with the Fort Hood killer, she will forever be credited with ending this bloody massacre:

Cone said the officer and her partner responded "very quickly" to the scene of the shootings -- reportedly in about three minutes.

He said she shot the gunman four times and was wounded herself in an exchange of gunfire with him.

"Really a pretty amazing and aggressive performance by this police officer," Cone said.

Authorities have identified the alleged gunman as Maj. Nidal Malik Hasan, 39, an Army psychiatrist. They said he opened fire at a military processing center Thursday at Fort Hood, killing 13 people and wounding 30.

Cone was asked if Munley's shots brought down the assailant and stopped him from shooting.

"That's correct," Cone said. "The critical factor here was her quick response to the situation."