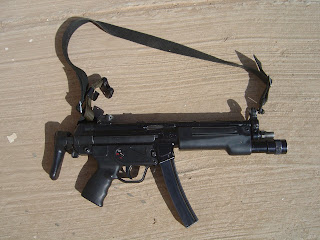 It is late Christmas Day. Please read “Christmas at War” from yesterday and may everyone have a wonderful holiday season.

Now that Christmas is just about over, I can concentrate on continuing to wait for my mobilization orders. I have been given the word that it won’t be January 1 (which is good since that is almost upon us) but that the 15th is a possibility. I am not alone. There are several of us in my local Army Reserve unit whose mobilization packets were submitted some time ago.

While it is unknown why our parent unit is waiting to call us up, I suspect it is because they are waiting to find out exactly what President Bush’s “New Way Forward” will consist of and how our unit will be tasked.

As I continue to reflect on my tour in Iraq in 2004, I remembered an incident where we learned once again that the Army, like any other organization, has its black sheep. The vast majority of soldiers perform their missions with honor and integrity. Still, there are always those who are in it for themselves.

I was fortunate to work with a team that was comprised entirely of police officers. When we were approached one evening to participate in a shady weapons deal, there was only one thing to do. The following op-ed piece tells the story:

The Army master sergeant had served in Iraq since the beginning of the war. When our command arrived in Baghdad’s Green Zone in February of 2004 to replace his unit, he extended his tour to serve in one of the offices at the Coalition Provisional Authority. The CPA was located in Saddam Hussein’s former residence, the elaborate palace that eventually became the U.S. Embassy.

My team, the COBRA Team, went to Iraq to serve as the protective service detail for an American general. In our limited off-duty time, we lived in a small house on the west bank of the Tigris River. (We called it the COBRA pit.) We were well-armed and, depending on the mission, carried M16s, M4 carbines, shotguns, M9 Berettas, an M79 grenade launcher (courtesy of the Marine Corps), two squad automatic weapons, a German sniper rifle or MP5s. Like the sniper rifle, the MP5 submachine guns had been captured from Saddam Hussein, but their compact nature made them perfect for use on most of our missions.

One evening we had a visit from the master sergeant, a man with many years of service in the Army. He said he heard we had some MP5s and he wanted to know if we would like to trade them for some Glock handguns. We were surprised because we thought the only Glock handguns around were the thousands that had been delivered to the CPA for use by the new Iraqi police.

My civilian job as a police officer has made me suspicious by nature. Once this man told me the Glocks were brand new, I was convinced they were stolen. My team members, also cops in civilian life, looked at me out of the corners of their eyes as I made a deal to trade two of our MP5s for two Glocks. If the handguns were stolen, I wanted to nail this guy. The exchange would happen the following evening.

The next morning, just before I went to the CPA to report the encounter, we were contacted by another sergeant from our headquarters. He said the master sergeant had come to him asking if he knew how much the Glocks would bring on the streets of Baghdad. Now we really had a problem. If this soldier sold weapons to Iraqi civilians, it was almost a certainty that such weapons would ultimately be used against Americans.

With the assistance of one of our unit’s officers, I made contact with the Defense Department’s Criminal Investigative Service at the CPA. The DCIS agents confirmed that there had been thefts from the CPA. I told them I had arranged a weapons trade for that night. The agents decided they would also be present when the deal went down.

The master sergeant showed up at our house at the appointed hour. He had one brand new Glock handgun in a box with two magazines. I gave him one MP5 and walked him outside to the street. I shook hands with him – the pre-arranged “done deal” signal to the DCIS agents – and they made the arrest. The serial number of the Glock confirmed that it had come from the stock of Iraqi police weapons at the CPA, weapons paid for with American tax dollars. When we left Baghdad, the case was still pending, but we were told the thefts had stopped.

In every war there are thieves, profiteers, black-market operators and those who think that the war is their own private business enterprise. Wars will always have these black sheep, those who dishonor themselves for pleasure or profit.

The overwhelming majority of the men and women serving in today’s military fervently believe in living by fundamental character traits such as the Army values: Loyalty, duty, respect, selfless service, honor, integrity and personal courage.

Thankfully, these good soldiers far outnumber the bad ones.