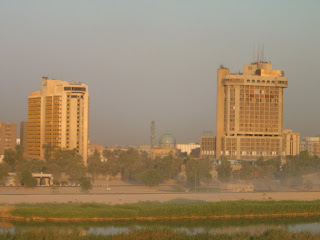 Standing on the roof of our headquarters building on the Tigris River in Baghdad, I looked across the river at the Sheraton Hotel and thought about how many times it had been the target of rockets. I saw the blue dome of the nearby mosque and heard the evening call to prayer. Hearing this several times a day became a memorable experience in this exotic, though dangerous, part of the world. With my tour in Iraq about to end, I was smoking a farewell cigar. It was time to go home.

I had taken my last look at Assassin’s Gate, Iraq’s Tomb of the Unknown Soldier, the gigantic monument of Swords and the presidential palace that is now the U.S. Embassy. I ate one more at the Chinese restaurant and the Green Zone Café. I experienced for the last time the intrigue of the al-Rasheed Hotel, where the reporters, the embassy staffers, the mercenaries and the spies hang out. I said my goodbyes to my Iraqi friends.

There would be one last convoy as we drove to the Baghdad airport. It would be a strange feeling to know that, once the wheels of the aircraft lifted off the ground, many of us would probably never again face the prospect of death by rockets, mortars, improvised explosive devices, ambushes or assassination. A few of us will surely return, but the job goes on for the thousands who remain behind.

Our four-man Protective Service Detail, the COBRA Team, was formed for one purpose. That mission was to ensure the safety of Gen. Charles Davidson, commander of the 350th Civil Affairs Command, during his tour of duty. To accomplish this, our movements in the air and on the ground had to be planned well enough that the enemy could not predict where we would be and would never see us as a “soft” target. True success would mean that we were never the victims of an IED, an ambush or an assassination attempt. The possibility of “bad luck” was always there, but it always is.

On Sept. 28, Davidson departed Iraq after completing his own important job. When he left, our primary mission had been successful and was at an end. My own last mission would be to get the members of my team out of Iraq and safely home.

During our missions in Iraq, we have been shot at but never wounded. We have been on the receiving end of rockets and mortars, but the shrapnel did not hit us. We have never been the victims of an improvised explosive device, a vehicle bomb or an ambush, but we have missed them all by only minutes. We have seen mysterious men in masks with AK-47s lurking in alleys along our routes but, with the general in our convoy, our job was to avoid contact. We are all combat veterans of other wars and did not need to “face the elephant” again, but we were ready, willing and able to do so.

For their overwhelming support, our families, friends, churches, employers and average Americans will have our gratitude forever. They kept our spirits up with letters, cards, e-mails and generous packages. Saying “thank you” could never be enough.

We are looking forward to reuniting with our families and resuming our civilian careers. Staff Sgt. Aaron Self will return to Texas to complete the police academy. He had only two weeks to go when he was activated. Sgt. Chad Higginbotham will return to his family and his law enforcement career in Mississippi. Newly promoted Sgt. John “Doc” Actis II, another Mississippi cop, has joined the ranks of the private security contractors making the big bucks. After taking a short break, he will return to Iraq as one of the “new” mercenary soldiers of his generation.

As for me, with Vietnam and Iraq on opposite ends of my career, it is time to return to the States and to my job as a police officer with the Altamonte Springs Police Department. At least the bad guys back there don’t use rockets and mortars.

To Debbie, my dear wife of 30 years who is the girl I left behind, I must simply say how blessed I will be to walk with you through every day of the rest of our lives.