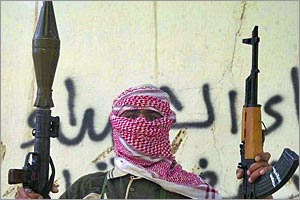 Yesterday, the 19th, I heard from my Army Reserve unit and I was updated regarding my pending mobilization. I am still on the list to return to active duty during the first part of January, 2007; however, I can’t help but believe that most units in the military are waiting to find out what the President’s new plan will be. Only then will they know how they will be expected to use their soldiers.

Upon my return from Iraq in October, 2004, like many veterans, I felt guilty leaving both my comrades and my new Iraqi friends behind. Sitting in safety back in the States, it remained important to me to stay tuned in to what was happening in Baghdad.

In Vietnam we faced an enemy who was able to train, equip and re-group in the sanctuaries of Laos and Cambodia. Even when America invaded Cambodia in 1971 to “clean out” those North Vietnamese camps, we were the ones accused by the anti-war crowd of “invading” Cambodia. No mention was made of the illegal use of those countries by the enemy to wage their war.

A similar situation has arisen in the Iraq and the Afghanistan wars, with insurgents and their supporters using Syria, Iran and Pakistan for the same purpose: to recruit, train, equip and re-group for attacks against us in Iraq.

I wrote the following article for the Orlando Sentinel and it appeared on December 19, 2004:

Once upon a time, the United States was fighting a war in a far-off country. The enemy soldiers were skilled insurgents fighting to advance their own agenda. They used neighboring countries as safe havens from which they could funnel arms, ammunition and soldiers into the war zone. After mounting attacks against innocent civilians and Americans, they would run back over the border to hide and to re-supply. Then they would return to wage war again – on their terms.

While the insurgents could make use of these other countries in that bloody war long ago, the Americans could not. For political reasons, the American military fought its ground war only in the war-torn country, until it was finally decided that enough was enough. American troops invaded Cambodia, taking a terrible toll on the enemy, rousting him from his hiding places, killing many of his soldiers and capturing tons of equipment and supplies. Though the North Vietnamese had not been criticized for their “invasion” of Cambodia, a double standard of the time accused the Americans of an “illegal” invasion.

There is gathering evidence that some of Saddam Hussein’s Sunni henchmen are based in Syria. With that government’s likely support, these old friends of Saddam are sending arms, ammunition and insurgents into Iraq to kill and maim both Iraqis and Americans. Further evidence suggests that the Iranian Shiite government is also supporting – with men and arms – efforts by Shiite insurgents to destroy the hope of freedom in Iraq.

Although, there is little disagreement that the war in Iraq could have been managed better all along, our commitment to the Iraqi people must remain firm. We turned their lives upside down in the process of liberating them. Now that the going is getting tough, as it always does in war, we must remember that we have no choice but to endure.

President Bush said in the beginning that we would go after the terrorists wherever they chose to hide. He said that if you support or harbor terrorists you were also the enemy. Those statements were inspiring and led to the liberation of tens of millions of people in Afghanistan and Iraq. The bill for the purchase of that liberation has been paid, and is still being paid, with the lives of gallant American and coalition soldiers as they continue to do a magnificent job.

Still, the world is watching the level of our nation’s resolve. Will America cave in or stay the course? As a soldier who has served in both Vietnam and Iraq, I pray we will not stop until victory is sure.

Soon, the Bush administration will have to decide how to handle the insurgent bases in Syria, Iran or other countries. Most soldiers would agree that the only way to win a war is to turn the enemy’s offense into the defense. We have progressed from fighting an offensive war to liberate Iraq to fighting a defensive war – our decisions have become reactive, not proactive. This is certainly a recipe for disaster, if not failure. If we are to prevail, we must go after the insurgents wherever they are.

There is one very good reason that we have not had a terrorist attack in this country since Sept. 11, 2001. We have put the terrorists on the run and they have learned that it is difficult to wage war from a hole in the ground. We must not let them find new safe havens in Syria, Iran or any other country that chooses to mock our efforts at defeating terrorism. Our enemies must never forget that, if they hurt our citizens or support those who do, we will hunt them down and capture or kill them, and we will do it relentlessly, no matter how long it takes and no matter where we have to go.

Most of all, we do not need another black wall in Washington filled with the names of warriors who gave their lives for a politically abandoned cause. This war must be won, regardless of the cost, and America’s sons and daughters must never again die in vain.