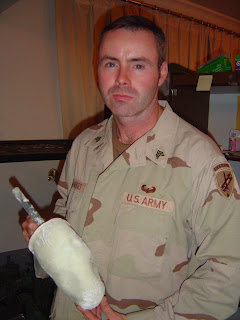 I wrote this article about a couple of extraordinary soldiers serving in Iraq. It appeared in the Orlando Sentinel on September 21, 2004:

During the Iran-Iraq War, an Iraqi tank commander tried to recover his senses after an Iranian shell had destroyed his tank. His fellow soldiers were dead, and, realizing that his own legs were gone, the soldier dragged himself out of the remains of the tank. Before he lost consciousness, he managed to tie tourniquets around the stumps of his legs.

More than 20 years later, this Iraqi man is living in a veterans’ community near Baghdad, where he recently met two American soldiers who would change his life and the lives of many others in Iraq with similar disabilities.

Sgt. Christopher Cummings has been an orthotic technician for 12 years in Fort Lauderdale. His specialty is making orthopedic braces and prosthetic devices. As a member of the 478th Civil Affairs Battalion, he deployed to Iraq in January as part of a civil affairs team led by Capt. Matt Pedersen, an Oviedo resident and member of the Orange County Sheriff’s Office.

Cummings knew he would find a need for his profession in Iraq, but he wasn’t sure how to put his skills to work. He lacked the contacts, and he still had to perform other duties as a member of his team. Fortunately, once it was discovered that he had the ability to make specialized devices for missing arms and legs, Army officers helped him focus that ability on helping some of the many disabled people in Iraq.

Cummings formed a unique partnership with another medical practitioner, Capt. Steve Lindsley of the 112th Military Police Battalion of the Mississippi National Guard. In space donated by the First Cavalry Division, the two men built a workshop. Both soldiers continued to work their regular schedules at other Army duties but spent their own time helping disabled Iraqis. Their efforts have become a significant civil affairs project for their own units and for the 350th Civil Affairs Command.

Cummings and Lindsley began working with the Al-Wasity Hospital in the Karada District of Baghdad. On their first visit to the hospital, they found two young men who would become the beneficiaries of the soldiers’ expertise. One was only 15 years old and lost his right leg in a hit-and-run accident two years ago. The other was a 20-year-old man who lost his right leg to cancer as an infant.

Cummings has many stories from the average people he and Lindsley have helped. One of the local Iraqi interpreters flew MIGs for the Iraqi Air Force during the first Gulf War. While flying back from Kuwait, he was shot down in error by Iraqi gunners and lost one of his legs. He went to Saddam Hussein for help but was instead thrown in jail for five years.

Cummings and Lindsley are waiting on the arrival of prosthetic materials donated by Mississippi Methodist Hospital in Jackson, Miss. These materials will provide the final hardware to complete the outfitting of many patients in the Baghdad area. Cummings has also arranged for a $44,000 civil affairs project so this mission will continue after his tour in Iraq ends next month.

Although he is going home, Cummings has made sure that disabled Iraqis will continue to get the help they need. In addition to his own efforts, he has trained Iraqi technicians at the Al-Wasity Hospital in the basic techniques of making prosthetic devices. Lindsley will be in Iraq until January, but then he, too, will return home. Their work will continue through the seeds they have planted in one Baghdad hospital.

Cummings feels that what he has been able to do in Iraq might be the most important thing he has ever done in his field of expertise. He and Lindsley may have helped dozens of people, but those seeds they planted will eventually help thousands.

That is quite a legacy for one sergeant and one captain to leave behind.

Note: Sgt. Cummings extended his tour to remain in Iraq and ensure that his civil affairs project was implemented successfully.
Posted by Charles M. Grist: at 5:45 PM